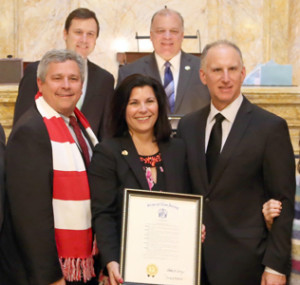 Just in time for spring, the state of New Jersey has designated the week of March 20-26 as Horticultural Therapy Week, inaugurated in ceremonial Senate resolution on Monday March 14.

New Jersey is the first state in the nation to formally designate that week, initially established by Congress in 2006, to celebrate the endless benefits of connecting people and plants in vocational, social and therapeutic programs in a peaceful non-threatening environment using horticulture modality to improve the quality of life, according to a March 15 press release from Final Touch Plantscaping LLC.

“Horticultural therapy is a time-proven practice,” state Sen. Christopher (Kip) Bateman said in the press release. “Designating a week each year to raise awareness of horticultural therapy in the Garden State will hopefully expand opportunities for more people to take advantage of the many benefits it offers.”