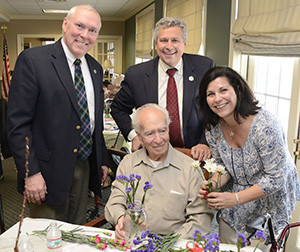 The week is a statewide observance of the benefits of horticultural therapy for the overall health and well-being of people of all ages. Bateman was a co-sponsor of the enabling legislation which was signed into law in 2015 by Gov. Christie.

Joining Bateman and Murray was Laura DePrado of Final Touch Plantscaping, a registered horticultural therapist who led a group of about 50 Chelsea residents and neighbors in a flower arranging exercise, followed by a vegetarian lunch.

Read the article
View and download the PDF
Posted in News