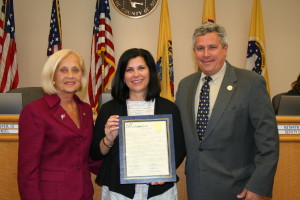 March 9th- Governor Chris Christie and New Jersey Legislature have declared this third week of March, 20-26, “Horticultural Therapy Week”, to coincide with the beginning of spring. New Jersey is the first in the nation to formally designate this week, initially established by Congress in 2006, to celebrate the endless benefits of connecting people and plants in vocational, social and therapeutic programs in a peaceful non-threatening environment using horticulture modality to improve the quality of life. During 2014-2015 legislative session, SJR12 (Bateman-Vitale), AJR13 (Simon-Vanieri-Huttle) passed its way in and out of senior, health and human services committees, Full Senate and Full Assembly and was signed by Governor Christie on May 11, 2015.

“Horticultural Therapy is a time-proven practice.  Designating a week each year to raise awareness of Horticultural Therapy in the Garden State, first in the nation, will hopefully expand opportunities for more people to take advantage of the many benefits it offers,” said Senator Christopher “Kip” Bateman, R-16 Somerset, Hunterdon, Mercer and Middlesex. “Ceremonial” inaugurating “Horticultural Therapy Week” will take place in the Senate voting session on Monday March 14th. U.S. Congressman Leonard Lance will also be issuing federal Proclamation at a separate time. Both Hunterdon and Somerset County Boards of Chosen Freeholders have issued Proclamations in celebration.

Horticultural Therapy is beneficial for people of all ages and all walks of life in a wide variety of rehabilitative, health care, arboreta, and residential settings providing benefits directly through formal programs with trained and credentialed horticultural therapy professionals. Evidenced-based research reveals the physical, psychological, cognitive and social benefits of this practice which focuses on the engagement of participants in horticultural-related, seasonal activities. Participants have an identified disability, illness, or life circumstance, and participation takes place within the context of an established treatment, rehabilitation, or vocational plan by a trained horticultural therapist.

New Jersey Executive Director of the USDA Farm Service Agency, Paul Hlubik said, “As a farmer and as the spouse of a horticulturalist, I recognize firsthand the healing powers of working with one’s hands in the soil and with plant life. As a public advocate for every segment of New Jersey agriculture through my work with growers and my colleagues in DC, I commend such awareness and unyielding support of the Horticultural industry here in the Garden State.”

“Growing a garden and working with plants provides many benefits to people, such as physical activity, concentration, and a sense of accomplishment,” said New Jersey Secretary of Agriculture Douglas H. Fisher.  “All people benefit from learning how to work the land and how hard work pays off in the form of beautiful flowers, decorative landscapes and food to eat.”

Laura DePrado, HTR, Owner of Final Touch Plantscaping, LLC, Somerset County, spearheaded SJR12/AJR13, and has been invited to attend Senate Ceremonial as a member of the American Horticultural Therapy Association, (AHTA), a 501 (c) (3), committed to sharing research, professional standards, and best practices and provides credentialing for Registered Horticultural Therapists. Events and activities will take place throughout the state this month including a display of the AHTA at the Statehouse, New Jersey Firemen’s Home, the Chelsea Senior Living, The Farmer and The Chickpea, and Black River Roasters in partnership with Final Touch Plantscaping, LLC.

DePrado is an award winning journalist, and Horticultural Therapist and is described as a “Pioneer”, a “voice” for the diverse populations served through “HT”, and advocates for the profession garnering tremendous support from Agricultural leaders across the  state, including the NJ Farm Bureau and State Board of Agriculture, and the AmericaSociety of Landscape Architects, NJ Chapter. DePrado is the recipient of the 2015 NJ Nursery and Landscape Association (NJNLA) Distinguished Service Award for expanding the Horticulture sector in New Jersey, and the 2013 AHTA Alice Burlingame Humanitarian Award for efforts. Therese Sacchieri, M.D., Annandale Family Practice, LLC., Hunterdon County, said, “I have been so impressed with the positive effects, both cognitive and emotional, on one of my senior patients, that I have asked Laura DePrado to work with four more of my patients whom I feel would benefit from Horticultural Therapy.”

The Assembled delegates to the 101st Agricultural Convention on February 10th, unanimously consented for “Horticultural Therapy” Resolution for the fourth consecutive year. The Convention annually assembles delegates from over 100 agricultural organizations, including Rutgers New Jersey Agricultural Experiment Station, NJ Farm Bureau, and NJNLA, to debate and adopt policy resolutions that inform the work of the NJ Department of Agriculture for the coming years.

“Working with plants at any level has a multitude of benefits. Horticultural Therapy is one way in which endless populations can derive these benefits and live a better life. HT also represents another market channel for New Jersey nurseries, and further spreads the message that gardening activities, indoors or outdoors, and getting out in the garden is good for your mind, body, and soul,” according to Dominick Mondi, Executive Director, NJNLA. The NJNLA is comprised of 400 plus member companies encompassing all facets of the nursery, greenhouse, landscape and retail garden center industry in New Jersey.