Since Jan. 1, 2014, more than 6,300 bills and resolutions have been introduced by the state Senate and Assembly. If you weed out duplicates, the list of bills for the 2014-2015 Legislative Session total approximately 4,300. Only a few hundred per session ever become law. On March 26, the General Assembly passed Joint Resolution, AJR13, designating the third week of March as “Horticultural Therapy Week.”  END_OF_DOCUMENT_TOKEN_TO_BE_REPLACED 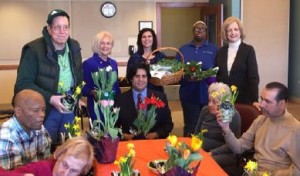 Just in time for spring, the Somerset County Board of Chosen Freeholders issued a proclamation declaring March 15 to March 21 as Horticultural Therapy Week.

“Horticultural therapy is the practice of utilizing garden environments to aid in rehabilitative and vocational therapies and is also used in treatment of mental illness,” said Freeholder Deputy Director Patricia Walsh. “Somerset County is pleased to promote the use of this beneficial and effective therapy this week and throughout the year.” END_OF_DOCUMENT_TOKEN_TO_BE_REPLACED